I realize the southern blizzard was days ago … although it seems like weeks ago!  I touched on the subject here with a recap of the weekend.  However, I have since been busy as a bumble bee (new tagline?) and haven’t had a chance to blog about The Blizzard of 2013.

I might be overly dramatic but it was a lot of snow for this beautiful southern town … in a very short amount of time. So here we go…

If you grew up around here, then you are considered a Southerner.

If you are a Southerner, then you freak out at the drop of one snow flake. *cough cough Mom* 😉

Southerners have no idea how to drive or manage in snow or ice.  Practice makes perfect, right?  Well we get very little practice each year, so therefore we really stink at dealing with all the white fluffy stuff.

I don’t remember the weatherman saying we were going to have a blizzard on Saturday.  Then again, I don’t watch the news everyday.

I was in Bessemer City when the blizzard decided to attack.  I was in one of my favorite Gaston County Goodwill stores to be exact.

And racking up too — the cart was full.  I was elbowing people for more room.  “Excuse me, I was looking at that dress!” 😉

Then I hear my mom, “Oh no it is snowing really hard … and starting to stick!”  Yep, when it sticks to anything, we (Southerners) freak the heck out.

Cue Mom in panic mode.  I cannot be rushed at Goodwill and I was being rushed.  I ended up buying 3 items and hitting the road.  My mom was out of there faster than … a thunderstorm in the summer?  I don’t know.  She peeled out of there without even dusting off her car.

So here I am stuck in the parking lot of Goodwill (that had cleared out btw) dusting off my car.  I also don’t have a working defroster which made that trip back to Charlotte even more fun and exciting.

Mom calls from the road, “Where are you?!  Maybe you should come back to our house!”

No thank you.  I was not prepared for an overnight stay, and I do not do well with unplanned visits.

I proceeded to make the trek back to Charlotte which took about an hour and half.  It looked a lot like this: 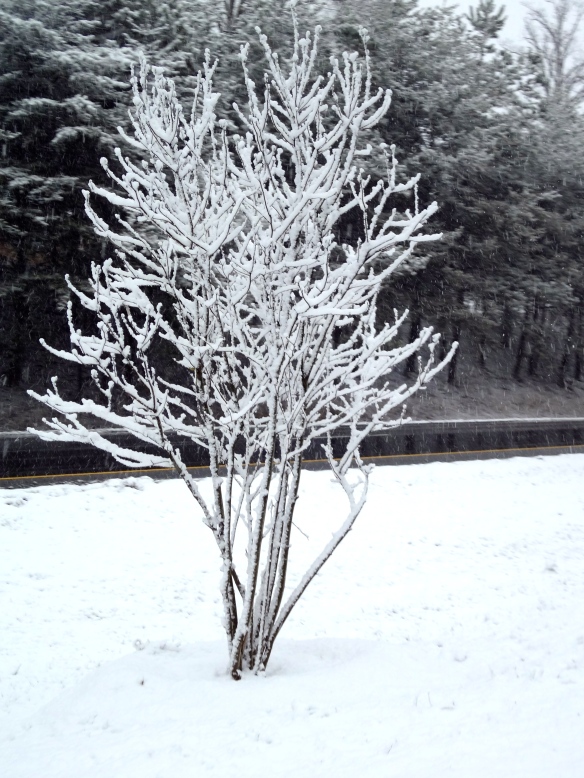 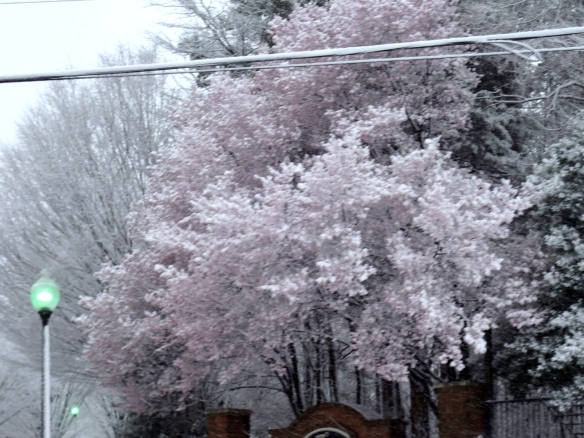 Those are blooming trees covered in snow. Global warming anyone?

What I don’t understand is the concept of riding on the interstate … in a blizzard … with your caution lights on?  That is fine if you want to go 30mph … but why bother when you are going 70?  *scratching head*

I made it back and took some pictures outside with Raymond and Cody.  They were short lived as Cody and Raymond were “so over it”.

View from the apartment

I was way too excited to be in the snow with Cody. 🙂

The next morning Raymond was all about the pictures and the taking. 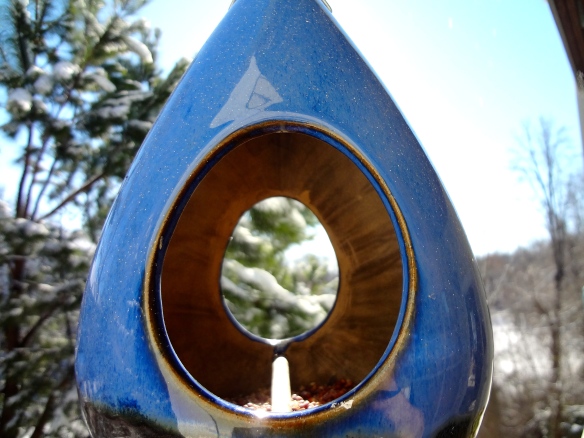 I was left to my own devices .. iPhone device to be exact.  😉  I luuuurrvvee me some Instagram so it was a photographer showdown. 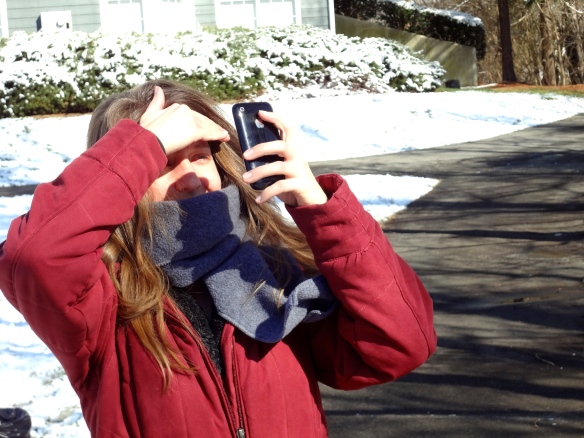 iPhone 3GS giving him a run for his money! 😉

We had a great time until I realized he had to leave!  IKEA President’s Day sale was starting in 15 mins.  Eeekk must get GORM unit for $9.99 before everyone else.

One last photo then we booked it out of there faster than … a thunderstorm in summer?  Still no good?  Eh. 🙂

Error: Twitter did not respond. Please wait a few minutes and refresh this page.